Miserere mei, Deus was composed by the Italian composer Gregorio Allegri (1582-1652) during the 1630s for use in the Sistine Chapel during matins, as part of the exclusive Tenebrae service on Wednesday and Friday of the Holy Week.

The Miserere is written for two choirs, one of five and one of four voices, and is generally accepted to be one of the finest examples of Renaissance polyphony to survive to the present day. Tutti choirs sing a simple version of the original Miserere chant; one voice then, spatially separated, sings an ornamented “commentary” on this. The comment-part is left out in this arrangement due to its meaning with text, though monotonous in tune.

The introduction is added by the arranger, Espen Haukus, to set the right atmosphere before the original chant is played. The brass choirs are meant to be placed opposite each other in a church or large hall.

View a video of Norges Nasjonale Brassband performing the piece below: 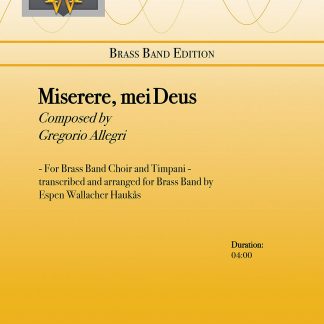