Printed in letter size format only.

The fourth in BrookWright’s series of classic marches transcribed for brass sextet, Death or Glory was originally composed by the prolific 19th century composer of marches, Robert Browne Hall (1858-1907). This march was written for the Tenth Regiment Band of Albany, New York, which the composer was directing at the time. In fact it is also known as Tenth Regiment March. The march received added recognition in 1996 when it was featured in the movie, Brassed Off.

The march is arranged by Keith M. Wilkinson so that all the important elements from the original are maintained, and will be ideal for smaller groups where fielding a full band is not possible. The flexible instrumentation means it will be playable by a wide range of instruments, and comes with optional drum set part. 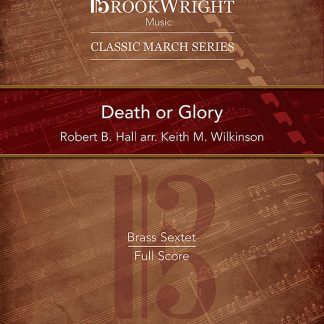