We Seven, the title of this work, comes from a book by the same name written by the United States’s first astronauts.

Composer Derek Jenkins writes: ‘In 1959, the United States entered the space race by starting a programme whose main aims included sending a solo astronaut into space and recovering him safely. Project Mercury, as this programme was so called, recruited the first seven American astronauts and successfully sent six of them into space. These men were Scott Carpenter, Gordon Cooper, John Glenn, Gus Grissom, Wally Schirra, Alan Shepard, and Deke Slayton, and collectively they became known as the ‘Mercury Seven.’

Through their efforts and those of countless others, the United States Space Program accomplished much with these six flights, including successfully sending an astronaut into space, putting a man in orbit, and keeping him up there for more than 24 hours. In 1962, shortly after Glenn and Carpenter’s orbital flights, the ‘Mercury Seven’ co-wrote the book We Seven and throughout it, the astronauts discuss the events leading from their selection into the programme up through Carpenter’s flight in May of 1962.

The primary material for the work comes from two sources: the use of musical cryptograms to encode the astronauts names and initials into pitches and the aria ‘Un bel di vedremo’ from Giacomo Puccini’s opera, Madame Butterfly. The inclusion of the latter comes directly from one of Glenn’s chapters in the book. Together with a couple of the other astronauts, he would often listen to the opera to unwind from a long day of training. I would like to think that as he was orbiting the Earth that this opera, particularly this aria, would be running through his mind.’

This work commemorates the Project Mercury on the 50th anniversary of its conclusion and was written for Joseph Parisi and the University of Missouri-Kansas City Wind Ensemble. This version for brass band has been prepared by the composer for the Fountain City Brass Band. 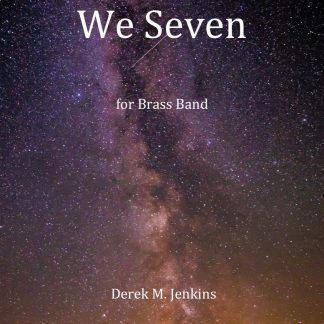