This magnificent work was written in 2019 for the London Central Fellowship Band and Bandmaster David Rudd. It is based on the hymn tune by Ralph Vaughan Williams, which is also known as For all the Saints. Its release in the summer of 2022 marks the 150th anniversary of Vaughan Williams’ birth.

The work is set in four contrasting movements, which follow an opening statement of the hymn in its full form.

Variation I (Leggiero) is based on the first few notes of the chorale and is lively and sprightly in nature, with regular time changes permeating throughout. There are regular statements of the hymn, with the movement closing with a full statement of the tune in its full glory.

Variation II (Andante Espressivo) derives its material from the final strain of the verse. The music is generally calm and ethereal in nature before building to an impassioned fortissimo featuring the full band, and finally dying away.

Variation III (Allegro Vivace) is in compound time and, like Variation I, is based on the first few notes of the hymn. The music is joyful and playful, epitomised by syncopated rhythms, and snippets of the tune are heard throughout.

Variation IV (Allegro Giocoso) is in the form of a fugue which commences with the cornets, before the theme is handed to each section of the band at various points. After several statements of the theme, the music grows into the final strain of the chorale, which is given a grandiose setting. A frenzied Presto coda leads into organ-like chords, before a series of upward major scales bring the work to its final chord. 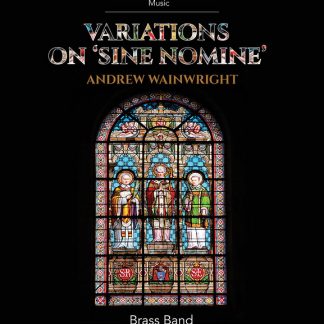