This beautiful arrangement of the much loved tenor solo The Three Kings was made for the GUS Band and euphonium soloist Mark Giles, for the CD recording Christmas Fantasia – The Music of Andrew Wainwright (2013).

The Three Kings, or Three Kings From Persian Lands Afar, is a Christmas carol by the German composer Peter Cornelius. He set Die Könige for a vocal soloist, accompanied by Philip Nicolai’s hymn Wie schön leuchtet der Morgenstern (‘How Brightly Shines the Morning Star’), which he erroneously thought was an Epiphany hymn. In fact, it is an Advent hymn in which the morning star is an allegory for the arrival of Jesus, not the Star of Bethlehem.

In Cornelius’ original second setting, the accompaniment was played on a piano but the English organist Ivor Atkins later arranged the accompaniment for choir, with the choir singing the words of the original hymn. The carol describes the visit of the Biblical Magi to the Infant Jesus during the Nativity and is also used as an Epiphany anthem. 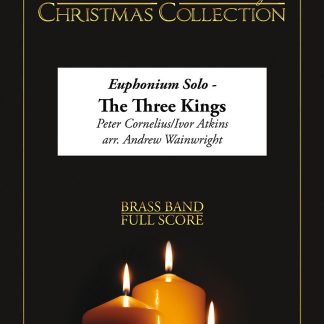 You're viewing: The Three Kings (Euphonium Solo with Brass Band) $34.99
Add to cart