Largo from Symphony No. 9 in E Minor

Between 1892 and 1895, the Czech composer Antonín Dvořák worked in the United States. Whilst there, he became fascinated by Native American music and the African-American spirituals that he heard. A commission from the New York Philharmonic led to him writing his Ninth Symphony, known as the ‘New World’ Symphony.

Dvořák did not use any Native American melodies in the Symphony. Instead, he wrote original themes that embodied their idiosyncrasies. From this came the famous cor anglais solo in the second movement (Largo), that was later adapted into the spiritual-like song Goin’ Home.

This arrangement by Rob Bushnell for Brass Quintet is ideal for wedding and concerts alike. The flexible parts mean it is playable by a variety of ensembles. 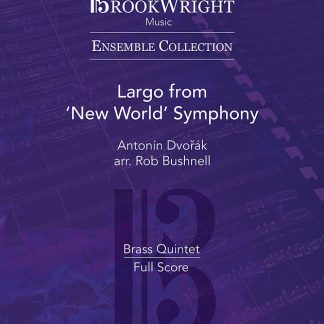