‘A kolo,’ which translates to round or circle, is a fast and lively traditional folk dance that originated in the Balkans. The music accompanying a kolo dance is characteristically quite repetitive. The primary melodic material is introduced at the beginning, and it continues to appear and reappear throughout the duration of the dance. Several composers, including Antonín Dvořák, have adapted the kolo into concert pieces for orchestra. These are often fast and exhilarating showpieces that portray the virtuosity of the entire ensemble.

This work entitled Kolo, by Derek Jenkins, continues this concert adaption tradition, and it follows the basic structure of the traditional dance with the exception of the middle section.

The composer writes: ‘I was fortunate to spend about two weeks in Zagreb and several days in Dubrovnik during the spring of 2009. Looking out upon the Adriatic Sea atop of Dubrovnik’s historic city wall, I was struck by an overwhelming sense of tranquility, and that feeling has become the strongest association I have with my time in Croatia.

‘In order to depict this musically, I forewent the continuation of the fast and lively character of the middle section of my Kolo and instead replaced it with music that is peaceful and reflective. The melody used in this slow section comes from a folk song, “Oj, mlađano mlado mom(če),” in Béla Bartók and Albert B. Lord’s folksong collection Serbo-Croatian Folk Songs. This middle section was my chance to return, if only in my mind, to the Adriatic coast.’

The original concert band version was commissioned by Lee Hartman and the Mid America Freedom Band. 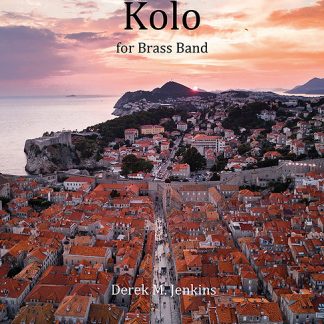