The three works in this set, arranged by Dave Collins, all come from Lyric Pieces (Lyriske stykker), a collection of 66 short pieces for solo piano written by Edvard Grieg. They were published in 10 volumes, from 1867 (Op. 12) to 1901 (Op. 71). The three chosen in this collection work idiomatically for the medium of a brass quartet and have energy, beautiful melodic moments, and unique character.

Puck (Småtroll) is the third work found in Book X, Op. 71, composed and published 1901. The piece is full of suspense as we dart around, ducking and diving – a spritely introduction to this collection!

Once Upon a Time (Det var engang) is also found within Book X, Op.71, as the first movement. The wistful opening melody is beautifully poignant, with a skipping second subject abundant with melancholy.

March of the Trolls (Trolltog), one of the most famous works in the collection, is found in Book V, Op. 54 (composed 1889–91). Numbers 1–4 of the original collection, including the 4th Movement March of the Trolls were later orchestrated and published as Lyric Suite. This playful and virtuosic finale conjures undeniable imagery of trolls of Scandinavian folklore. 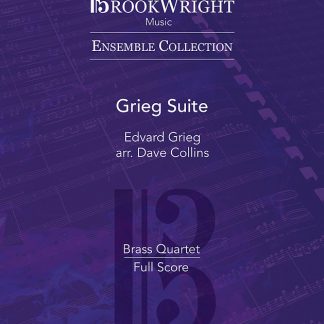