This concerto by Karl Whelan is written in three linked movements:

The first movement, Prelude, is in a mirror image sonata form and with its menacing ostinato sets the tone for the entire concerto and also introduces material on which the concerto is based. During this movement, the soloist has the opportunity to display their technical ability as well as the extremes of the instruments range.

A chord based on the notes of the ostinato signal the beginning of the second movement, Aria. Here, material from the first movement has been weaved together and moves through a multitude of keys, the soloist is able to show the expressive side of the instrument to create an almost yearning, operatic aria.

A reiteration of the 1st subject takes us into an almost march like figure at the beginning of the third movement, Scherzo. This is then interrupted both times by dance-like scherzo which, as with the rest of the concerto navigates itself through different keys leading to the cadenza that even the temple blocks have the the chance of participating in! The concerto concludes with almost a battle between the band (playing fragments of the first and second subjects from the first movement), and soloist who is attempting to have the last word! 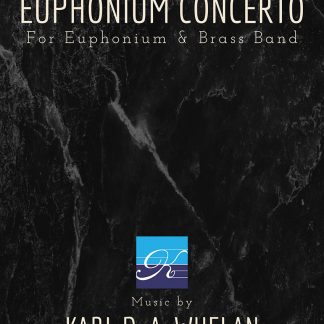 You're viewing: Euphonium Concerto with Brass Band $104.99
Add to cart