This arrangement of the popular carol Ding Dong Merrily on High is the first published work by BrookWright Music of English arranger Stephen Tighe. This accessible setting receives a fresh, rhythmic treatment, aided by the use of sleigh bells and tubular bells  (or glockenspiel).

The tune itself first appeared as a secular dance tune known under the title Branle de l’Official in Orchésographie, a dance book written by the French cleric, composer and writer Jehan Tabourot (1519–1593). The carol was first published in 1924 in his The Cambridge Carol-Book: Being Fifty-two Songs for Christmas, Easter, and Other Seasons. Woodward took an interest in church bell ringing, which no doubt aided him in writing it. The macaronic style is characteristic of Woodward’s delight in archaic poetry. 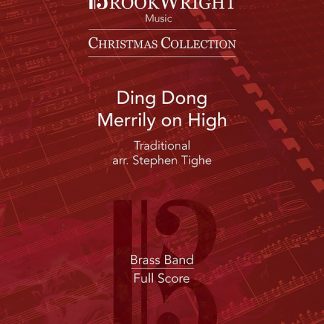 You're viewing: Ding Dong Merrily on High $39.99
Add to cart