Irish composer Sir Charles Villiers Stanford (1852-1924) was a music teacher and conductor of the late Romantic Era. Educated at the University of Cambridge, he became one of the founding professors of the Royal College of Music (RCM) – some of his most famous pupils being Gustav Holst and Ralph Vaughan-Williams. The Motet Beati Quorum Via is the third and best-known of Stanford’s Three Motets, Op 38. Based on latin text from Psalm 119 v.1:

Blessed are they whose road is straight,
who walk in the law of the Lord.

The prayer-like serenity of this work makes it work well for brass sextet. 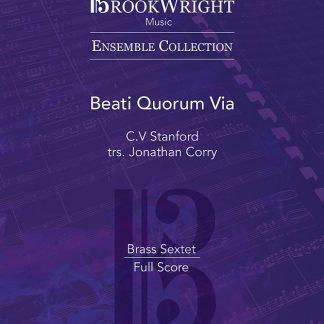